Chinese SSMs at our doorstep?

The Sydney Morning Herald reported that at approximately 7PM, on July 11, 2012, a Chinese Jianghu V class frigate (#560) ran aground at Half Moon Shoal within the Philippine EEZ. Xinhua news confirmed the accident at what they referred to as Banyue Shoal but did not identify the vessel. This ship is no stranger to Philippine waters, as it had reportedly been harassing Philippine fishermen in past months.

The circumstances that led to the grounding remain unclear at this time, although Philippine defense social media is rife with rumors of a deliberate grounding to establish yet another outpost within Philippine waters.
Combat Fleets of the World describes this class’ weapons suite as including six C-802 Ying Ji-2 surface-to-surface missiles (SSM) in rotating turrets. The C-802, referred to in the west as the “Seersucker” is an improved version of the Chinese “Silkworm” SSM, which is itself based on the Soviet Styx missile. As per Air Power Australia, this missile has a range of 110 nautical miles.

The book the Shoals of Palawan describes Half Moon Shoal as follows:

Half Moon Shoal has a rock named Inclined Rock, situation in latitude 8 deg 51 min N, longitude 116 deg 16 min E, which always shows above water on its southeastern side. The shoal, formed by a belt of coral even the surface, of an average width of 200 yards, is of oblong shape, nearly 3 miles in a northeast and opposite direction, with a breadth of 1 mile. On the eastern side, at 400 and 1,000 yards southward of Inclined Rock, there are two channels into the lagoon, the southern of which has a depth of 4 to 9 fathoms in it and is marked by a cluster of rocks on its north side awash at half tide and which generally show. Other half-tide rocks are interspersed over the belt. The average depth in the lagoon is 14 to 16 fathoms, with numerous patches of coral scattered about it. From the shoals, Balabac Peak (not in sight) bears 141 deg (139 deg mag) distant 71 miles. The tide rises and falls about 4 feet at Half Moon Shoal.

The following map has been drawn up using the data above, with the red circle indicating the reported maximum range of the C-802. From the frigate’s current vantage point, the entire western approach to the Balabac sea lane with within range of the ship’s missiles. It is not clear, however, if the ship is indeed equipped with SSMs. 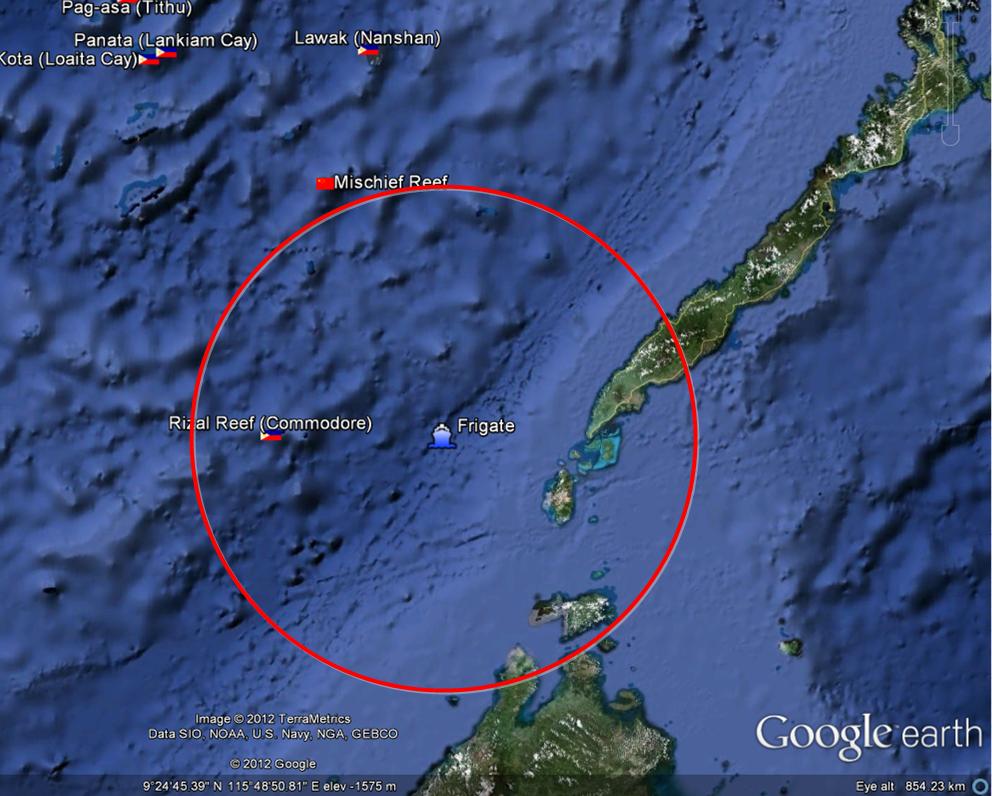